RELAX draw up a balance of their exhibition activity up to now. In the museum’s corridor they present all their receipts from 1984 to 2004 placed inside a twenty-meter-long vitrine. A shelf is mounted above the vitrine. It is between this shelf and the vitrine that a reality curve runs its graphic course, depicting the relationship between budget and exhibition area (from the personal show at Shedhalle Zurich 1990 to the show at Centre PasquArt Biel-Bienne, 2005) in a starkly falling line.

Video installation (back wall of the main corridor)
Six superimposed video projections show hands pasting receipts into notebooks. Loudspeakers reinforce the sounds that accompany the attempt at order. Nearby the video der Anwalt (the lawyer) is shown, in which the tax advisor reads his bill aloud to the artists in endless repetition.

Drawing room with video
Variations of the drawing l’indépendance n’a pas de prix shows a woman’s shoe hovering above a pile of dung. The video der urbeleg (the original receipt) restages the donation to a homeless person who hands them back a receipt.

The restaurant video
In the video wem das bier? (who gets the beer?) RELAX take a trip down memory lane: the waitress distributes the ordered drinks according to the traditional gender roles, underlining – like the children – how stubbornly values survive.

Scarecrows
A wall with 28 drawings of a scarecrow

Taxes
molnau (the sculpture), a video projection. We see RELAX making a scarecrow while children standing around shout: “And it’s our taxes that pay for that?”

Plastic bucket
Scarecrow bucket is the sculpure made out of a broom and other domestic elements, lamp, height: 2 meters.

Stack
The Installation Proof shows a stack of paper and plastic bags, carryalls and carton boxes, containing receipts from the shops (collected in the city of Biel-Bienne). A list compares turnover with display area, while a CCTV transmits pictures of the cashier’s desk of the art center onto a monitor.
. 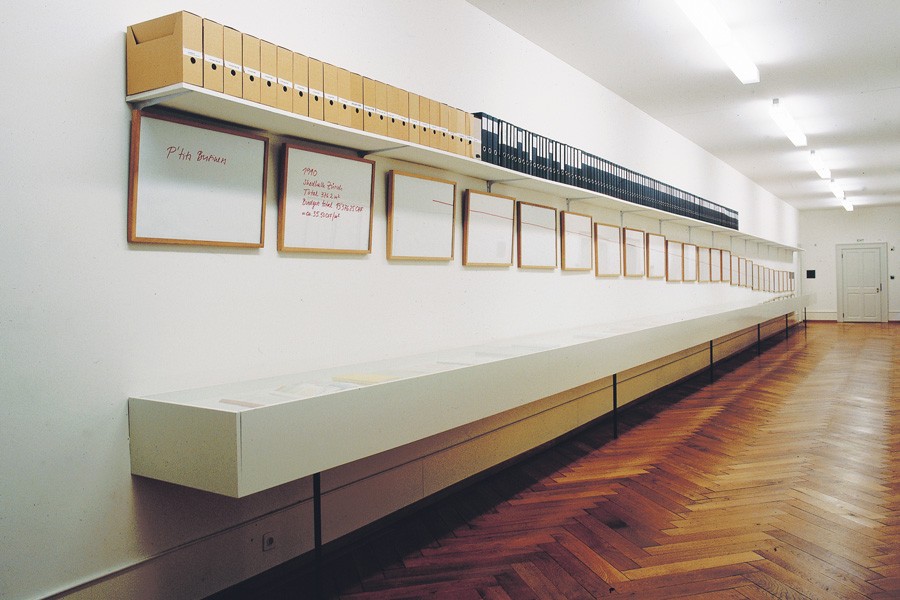 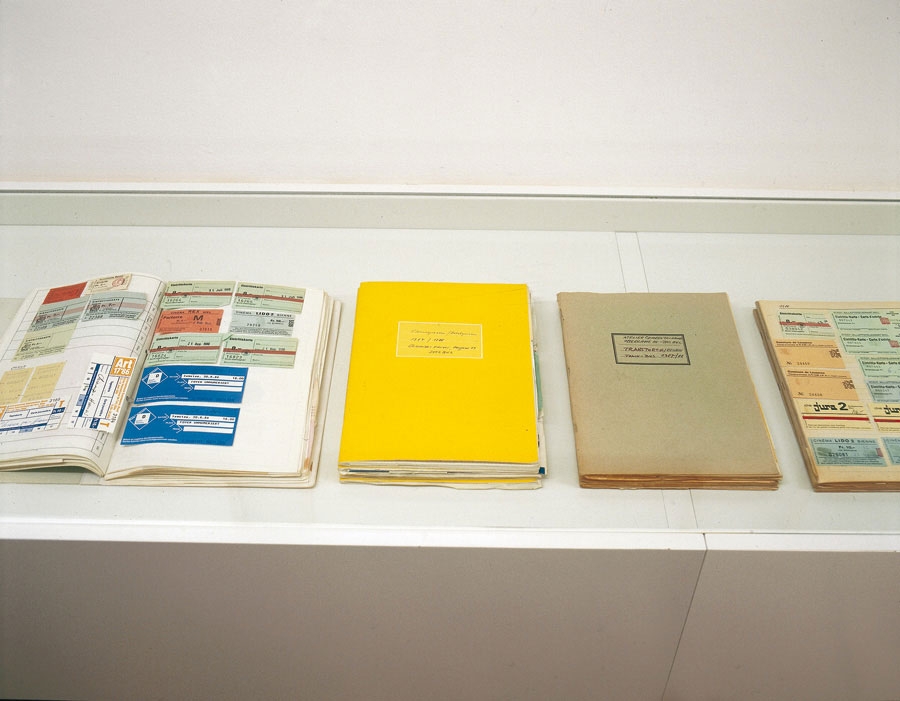 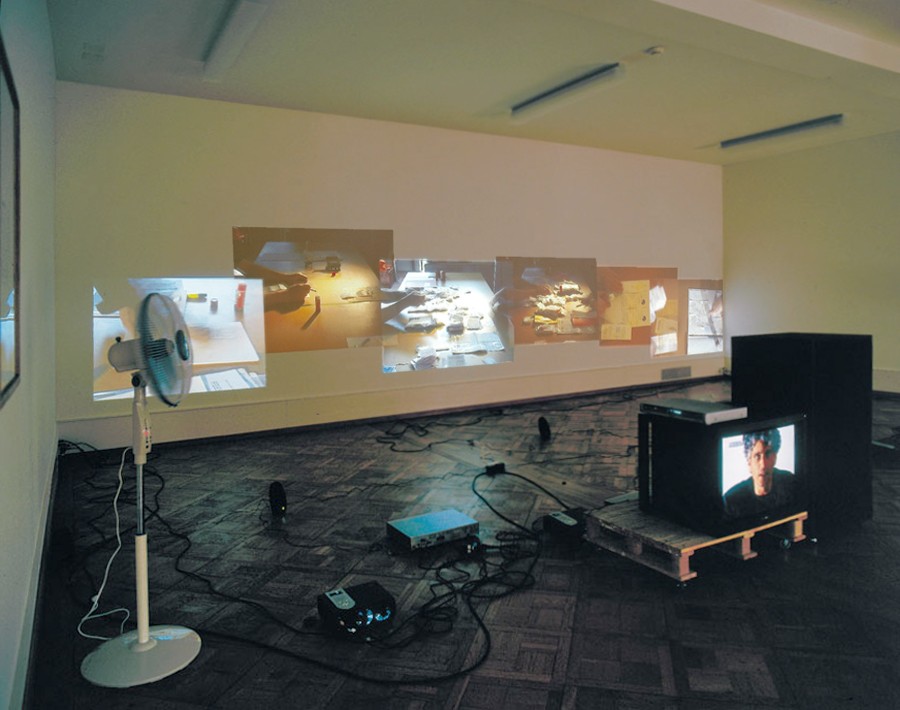 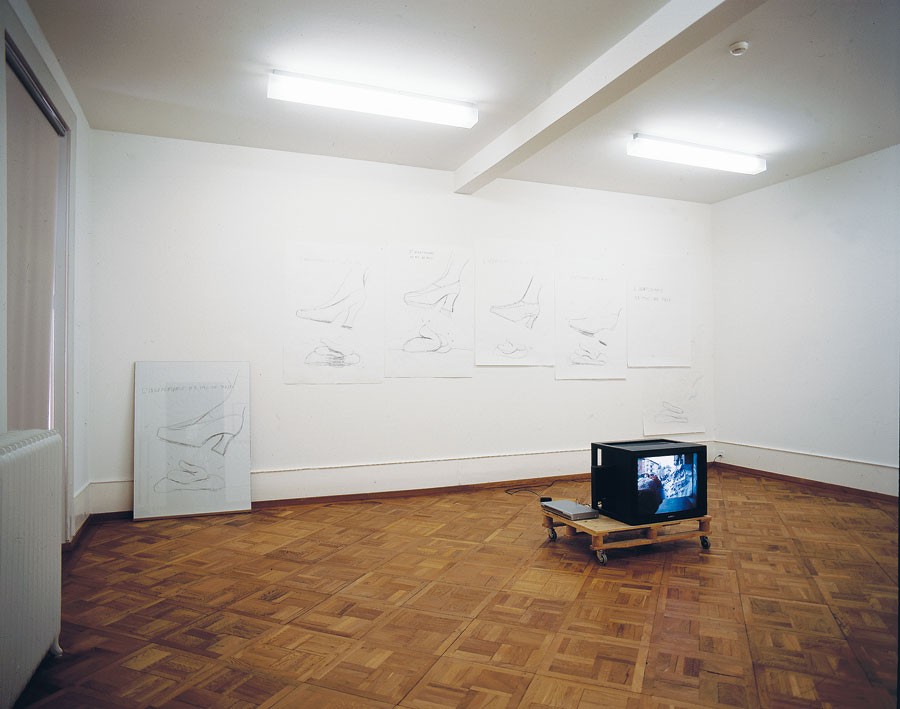 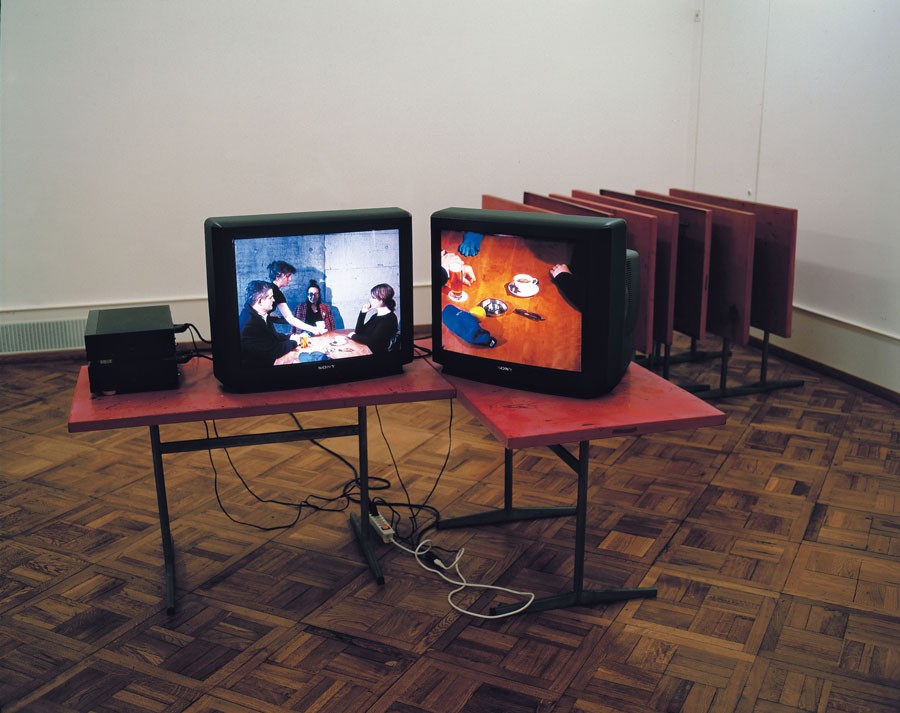 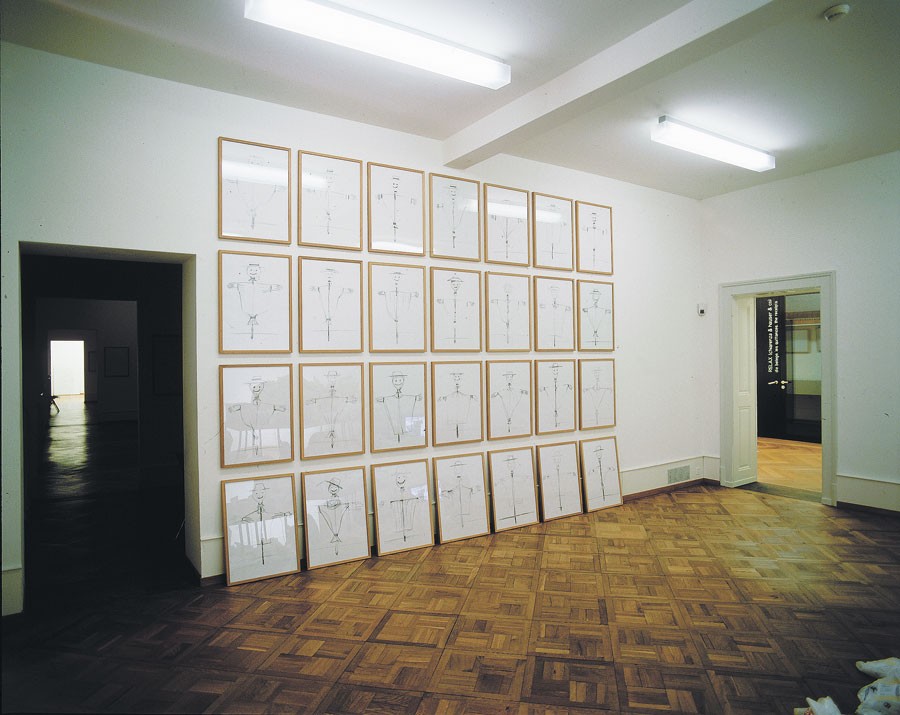 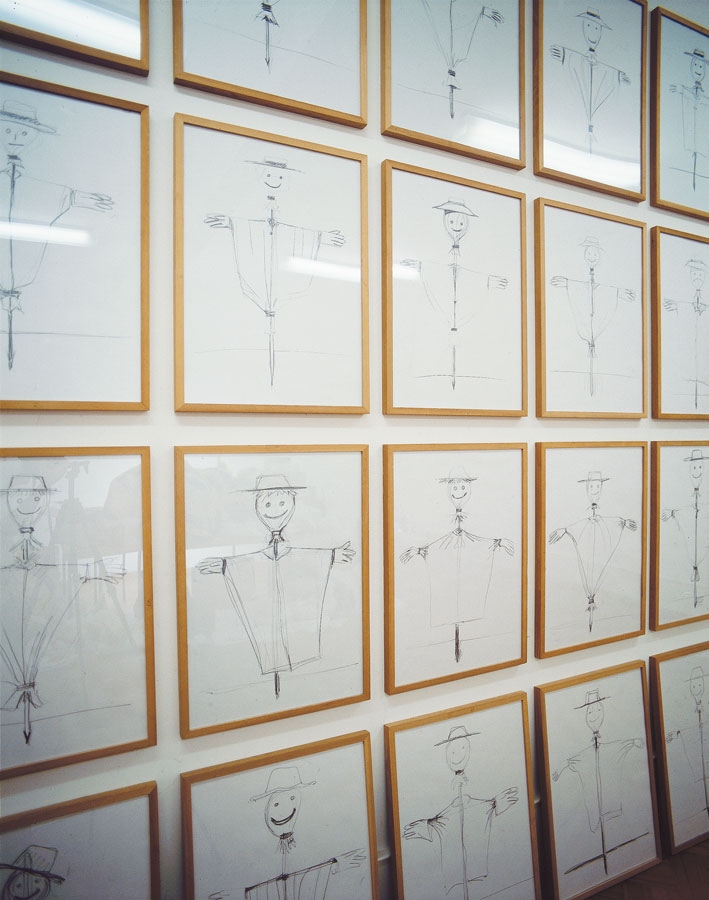 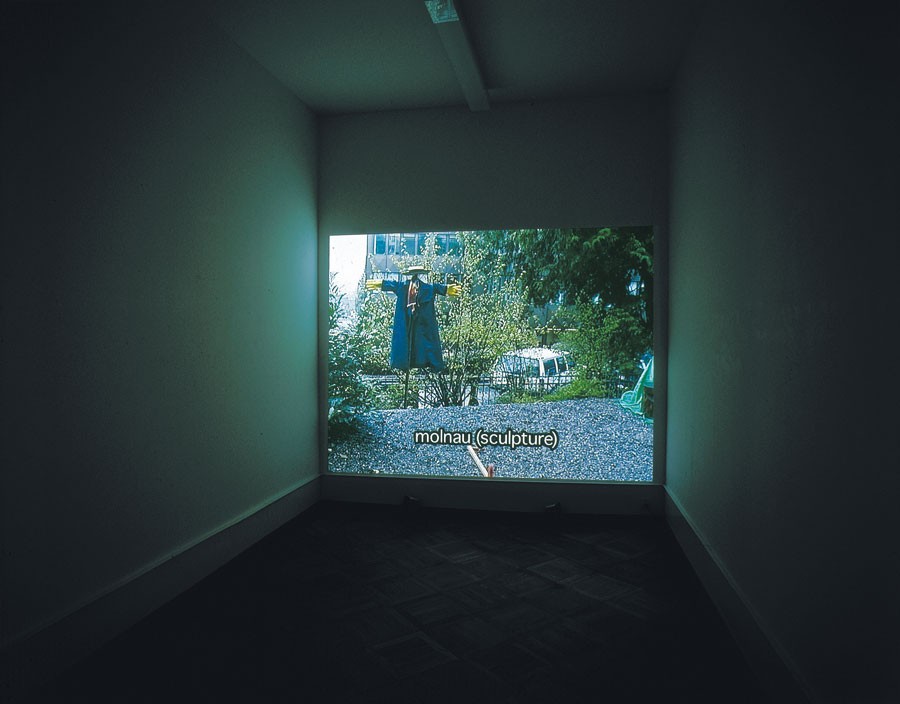 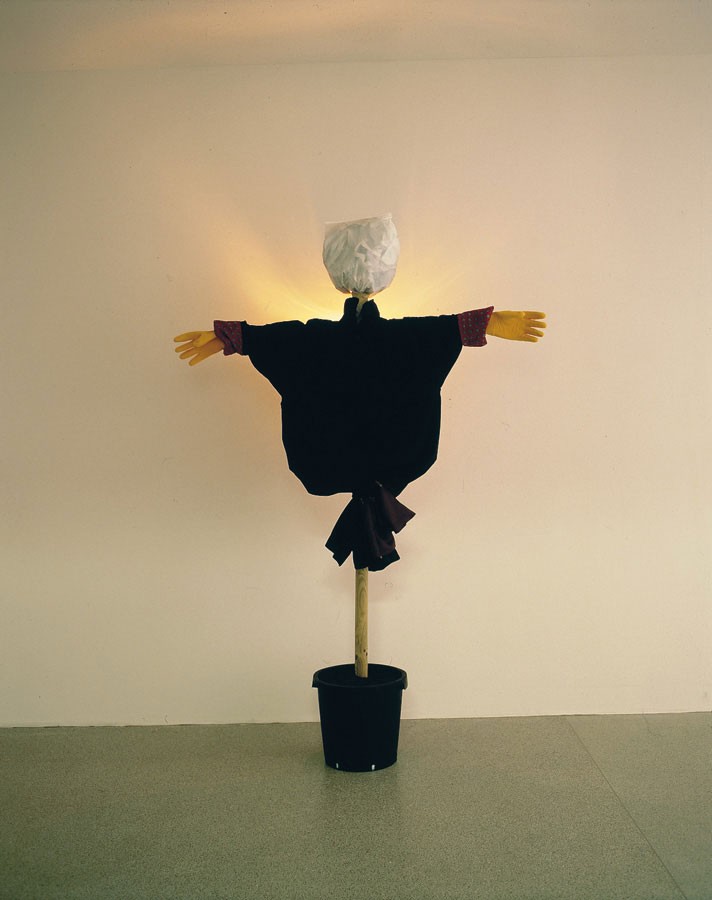 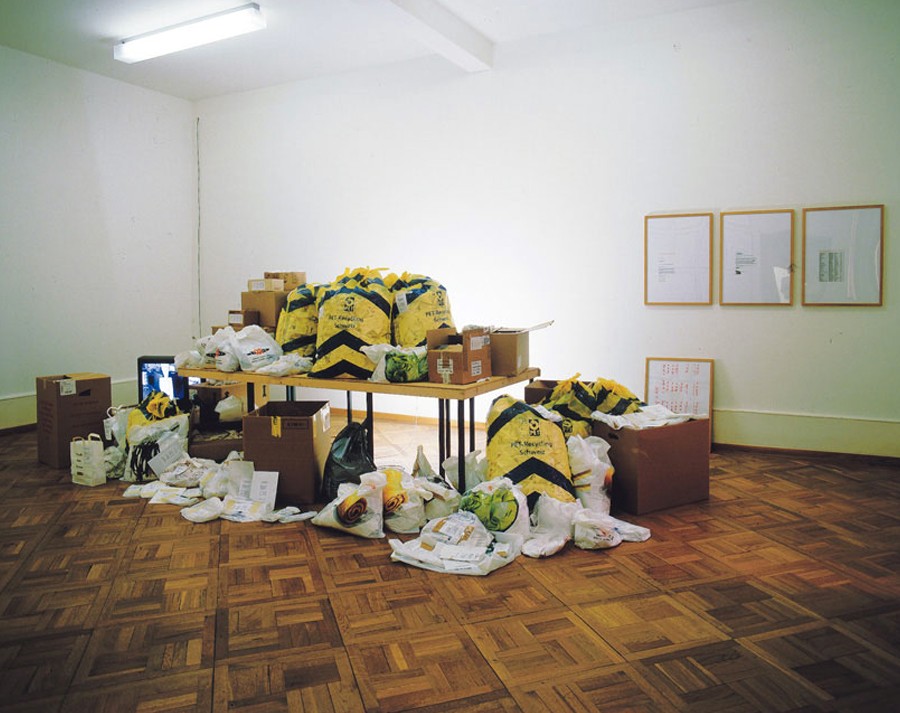