Hindelbank was built as a castle. The clear and strict hierarchy of the Baroque architecture made it an ideal prerequisite for turning it into an institution for “bad women” and later into a women’s prison. In the sixties, a modern building was constructed for the prisoners and the castle became the administrative center. The Project underlines the structural link between the two buildings. In the respective grounds are planted labyrinths of boxwood in cartouche form that outline the ground plans of the surveillance system: the Baroque grounds have been equipped with the floor plan of a single cell, a double cell, the control room and the ground plan of the new prison fence, while the new building has a pétanque field bordered by a yellow wall on which the first names of prisoners and staff have, too, been painted in gray.

Adjacent to the pétanque arena is a labyrinth garden in the shape of the two types of cell. On the steel pétanque balls, the first names of prisoners and staff have again been engraved. On a CD on sale at the prison shop, one can find many interviews with the prisoners, recounting their hopes and dreams. The voices have been recorded over one year, then edited down to one hour and sequenced on the structuce of one day.

The installation: 1 pétanque field with a yellow-painted concrete edge (, 173 first names painted gray on the edge, 21 boxes containing 3 steel pétanque balls, engraved with first names. Next to the pétanque field, a garden is planted with boxwood outlining the shape of the cells 400 x 1700 x 60 cm. In the Baroque garden of the prison boxwood forming 4 shapes: ground plans of a 400 x 400 cm cell, a 400 x 600 cm cell, a 400 x 800 cm control room and the reduction of the ground plan of the entire fence to 400 x 1000 cm. Production of an audio CD, 57’ (collected dreams, sounds of keys and other noises).

Excerpt from text by Susann Wintsch, in: we save what you give, monograph on RELAX, A project by edition fink through Verlag für moderne Kunst Nürnberg, 2006
. 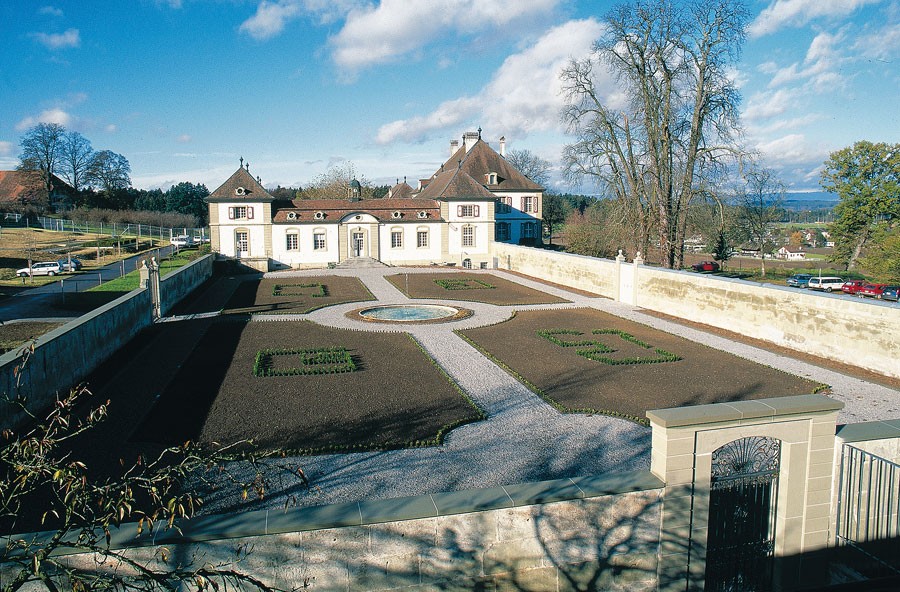 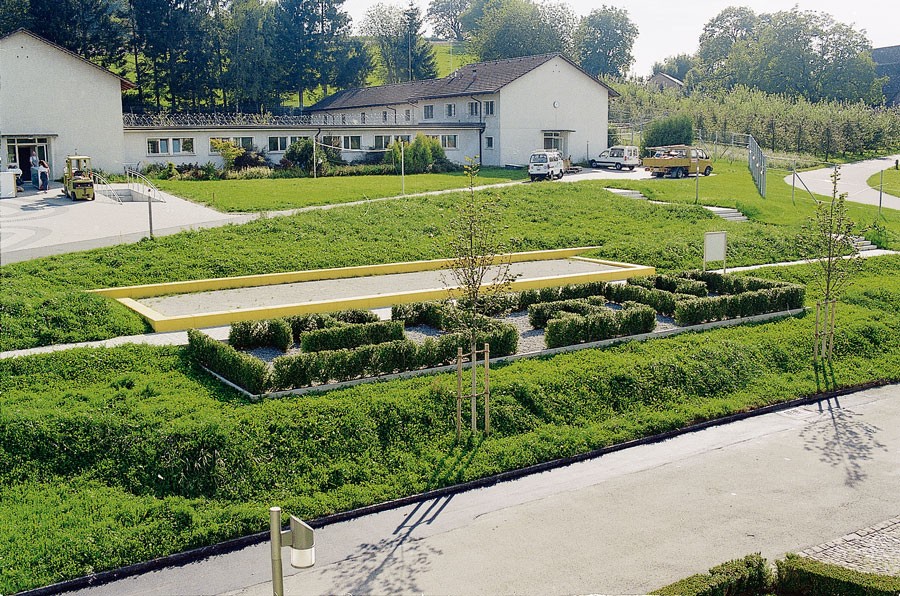 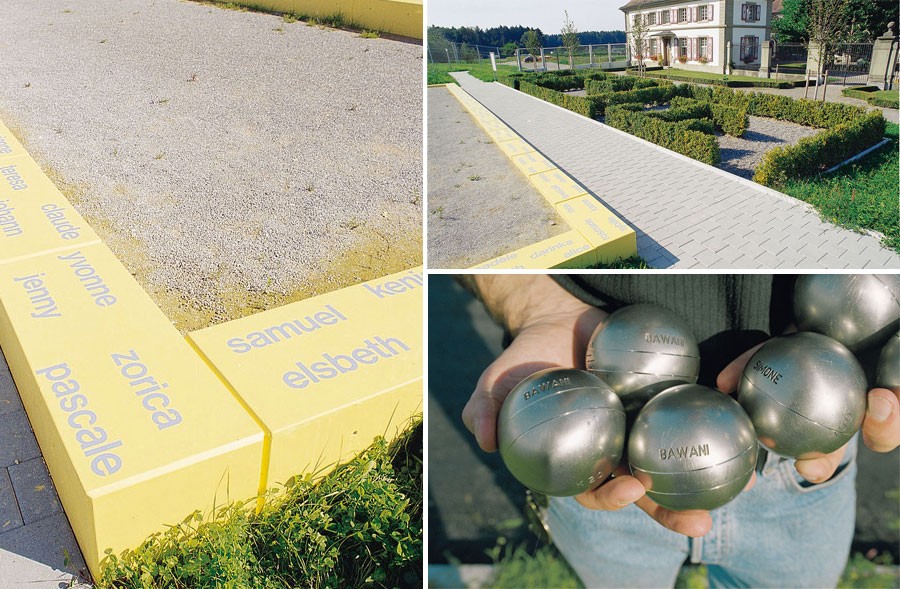 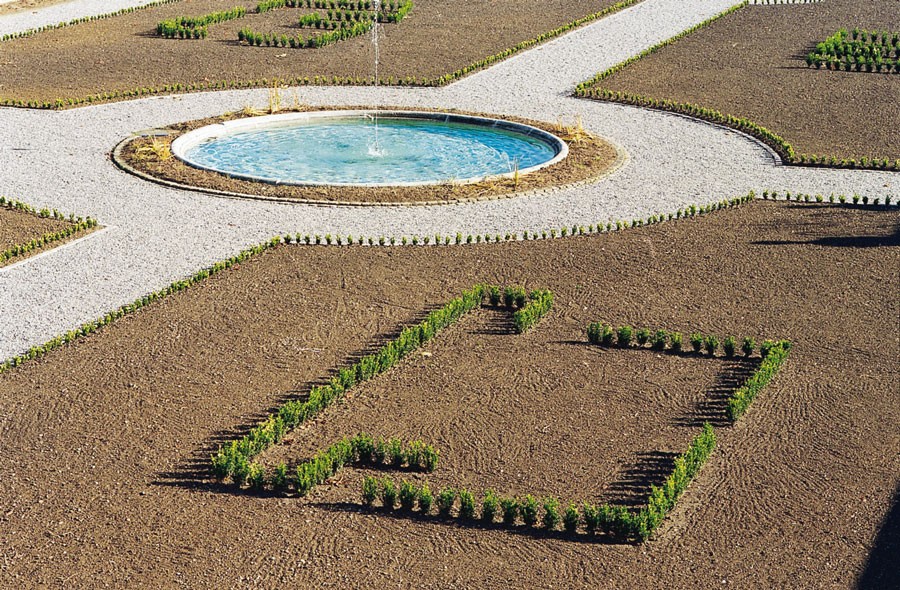 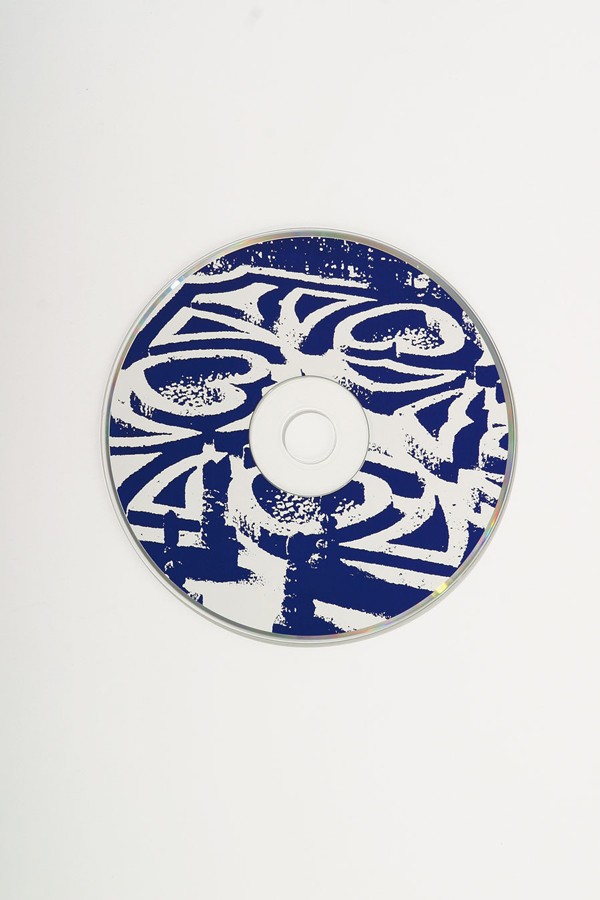