ich bin...ich auch, 1997
Permanent work / commissioned by the City of Dübendorf, Canton of Zurich, for the New Town Hall.

61 photo portraits
61 portraits of people who agreed, for the only time in their life, to sit in the desk chair of Dübendorf’s then president, Heinz Jauch, and have their portrait taken. Realization: Photos (100 x 70cm) mounted on aluminum, laminated and backed with aluminum spacer strips. The number of portraits was determined by the available wall space divided by the size of the individual portraits.

The text
“ich bin eine dübendorferin ich bin ein dübendorfer”. The script is made up of aluminum letters. They are mounted on metal pins. length: 620 cm.

The persons
The focus of “ich bin…ich auch” is on the people who live in Dübendorf, who come from there or are just visiting.

Public stage
The 61 portraits and the script “ich bin ein dübendorferin…ich bin ein dübendorfer” address the town hall as a public stage. The text links the portraits to the passageway into the Residents’ Registration Office. It takes its place next to J.F. Kennedy’s “ich bin ein Berliner” (I am a Berliner), which he declaimed in 1963 standing in front of the Schöneberg City Hall in West Berlin to show his support for the divided city during the cold war. When the wall fell in 1989, the world was no longer split in two, at least not between East and West. At about the same time, places and regions assessed as peripheral were suddenly receiving more attention.

Renewal 2012/13
In 2012/13 RELAX were commissioned by the town to renew “ich bin…ich auch”. The number of photos was reduced from the original 61 portraits to 57. This was necessary because the four photographs close to the floor had been too much exposed to everyday wear and tear. The photos: lambda prints, each 100 x 70 cm, mounted between two panes of plexiglass, backed with aluminum space strips. The text: “ich bin eine dübendorferin ich bin ein dübendorfer” was repaired.
. 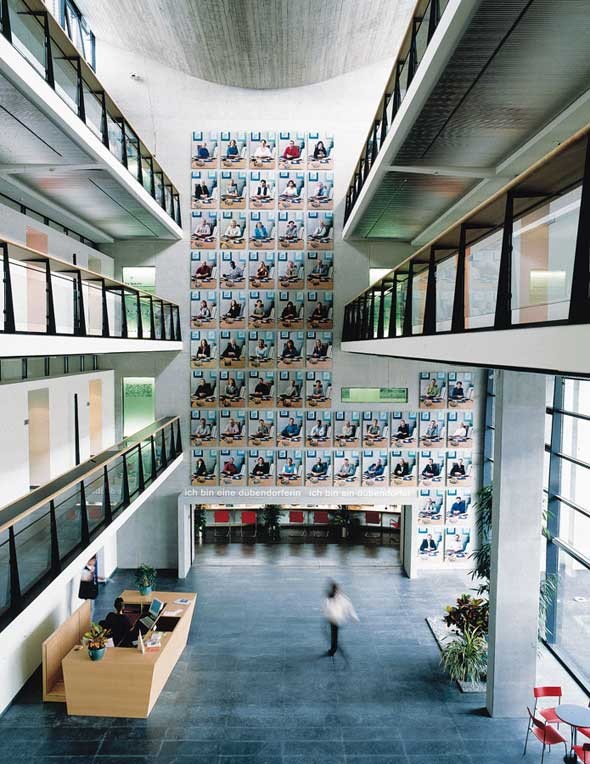