rodeo drive, 2011
Photo series of a parade with machines, vehicles and a yellow balloon. Public commission by the Canton of Zug for a permanent work at the New Hospital in Baar. Curated by Susann Wintsch.

In October 2010, RELAX sent a parade of farming and construction machines down a country road near a highway. The procession was led by two people who, with leaf blowers, whirled up the dust from the road. They were followed at a walking pace by lawn mowers, snow-removal equipment, tractors, spreaders, tedders, loaders, balers, slurry tankers, dredgers, skid loaders and finally a concrete mixer truck. At the second half of the procession, a large yellow balloon hung from a telescopic handler and hovered like a sun above the landscape.

The parade was supposed to offer all the participants and the few onlookers the opportunity of a collective experience on a Saturday morning in October 2010. And supposed to supply a view onto a cultural landscape motored over by machines designed to tend, cultivate and transform this very countryside.

Rodeo Drive is also a street in Los Angeles that, some sixty years ago, was hardly more than a horse trail and today is a luxurious boulevard for strolling and shopping. Whereas the landscape around the country road in the canton of Zug will hardly turn into a strolling zone since it is listed for protection. Any change in the picture of the landscape, for example cutting down or planting a fruit tree, needs certified approval. And yet. This landscape is also part of a small urbanized region around the towns of Baar and Zug, today one of the global centers for commodity trading. The taxes that this yields seem record-breakingly low. And living space in this region has become unaffordable for many.

Photo collages:
A series of 11 photo works was realized in an edition of 3. 10 of the 11 photo works are single photos hung alongside of, or overlapping, each other. The photos have been assembled in such a way that in the pictures one acre, the pathways or the horizontal lines are each connected. Edition 1/3 was carried out from 2009-2012 as the fourth of six stages and installed in 2011 within the framework of the project “Vom Fuss der Mauern in den Horizont” (from the foot of the walls to the horizon), an art staging at the hospital of the canton Zug in Baar. The work has been firmly installed since 2012.

Fig. 1
Satellite view, excerpt of Baar/Blickensdorf with Autobahn access to Baar and map and routes of the parade. Autumn 2010

Fig. 2 - 4
View of the parade that is crossing a section of an agricultural landscape in the canton of Zug. Autumn 2010
. 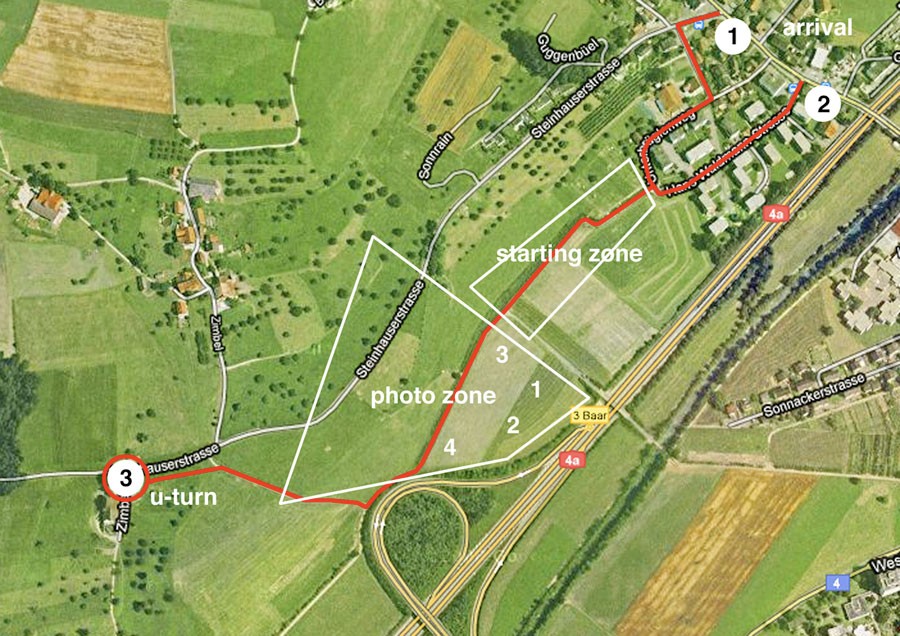