Art that belongs to everyone
ZWISCHEN (Between) is the name of the RELAX project, commissioned by the City of Bern for the new public school building in the district of Brünnen and built by the Ernst Gerber Architects + Planer AG, Bern. ZWISCHEN has three parts: 1) cushion-like useme*s in bright red, orange, yellow and silver, which are intersperced around all five floors of the new school. 2) useme*s hang on an apparatus especially designed for them between the school grounds and a fenced-in apple orchard and can also be found in the school’s garden. 3) ZWISCHEN also incorporates drawings by children who go to this public school, which are assembled as detachable postcards in the available concertina-folded pamphlet.

Useme* !
If you are holding a useme* in your hands just now, you can use it as you need or wish to. Because it is asking you to use it! And if you happen to find one somewhere stamped with the words “useme-bruennen.ch”, then look up the corresponding website and bring or send the useme* back to: Neue Volksschule Brünnen, Billeweg 5, 3027 Bern-Brünnen. The useme*s are the result of a series of simple test runs. The first one was implemented with great enthusiasm and with around 200 useme*s at the neighboring daycare facility (Kita Brünnengut) from early 2016 to early 2017. Then 1000 useme*s, slightly reworked, was supplied to the new Brünnen public school, where ever since an additional small number is regularly brought into circulation. The rest are stored in the basement in a large gray treasure chest. In the meantime the useme*s inhabit the schoolhouse. They nestle on the windowsills of school- and conference rooms as well as in the semi-public corridors. Several, in small groups, have found shelter in shelves; some lie around like limp socks or dozing backpacks in corners. Others, in turn, are loosely scattered on the floor of the cloakroom next to the schoolroom. Along with the city of Bern, the useme*s belong to everyone in the school, whether they go or work there or are simply on a visit.

Art for Everyday Use
Outdoors, not far from the orchard with rare apple varieties, a yellow steel sculpture stands that itself dreams of becoming a tree. From it hang many useme*s that are taken up by the school kids or staff, but also discovered by passers-by or those from the football grounds or the orchard, who can use or appropriate them. The shape the useme*s have adopted are a play on objects such as bones, neck supports, seat pads, water wings or even handbags. Useme*s are artistic objects developed for everyday use. They are thus decorative haptic forms scattered around the schoolhouse that offer comfortable bolsters, play objects or accessories, which however elude any clear and formal categorization or functional identification. It cannot be prevented that they will sometimes wind up being taken home. Yet even then they are still not stolen goods, for, after all, the reverse is possible: they could also wander from home or elsewhere and back to the school.

New Pathways
In May 2016 at a meeting with around 140 school children, drawings were done showing the routes to school between the Westside shopping/event center and Bümpliz and the districts of Brünnen and Gäbelbach with the highrise apartment buildings Gäbelbach/Holenacker. Again in November 2017, around 240 school children, partly some of the same ones from May 2016, did drawings of their route to school, which was now to the new schoolhouse. There are 11 concertina-folded pamphlets, each with 24 detachable postcards together with this text, which can be exchanged or sent per post. Since all the school children, teachers and the rest of the staff receive 2 of these apiece, the postcards of the drawings will circulate further and go their unforeseen way.
. 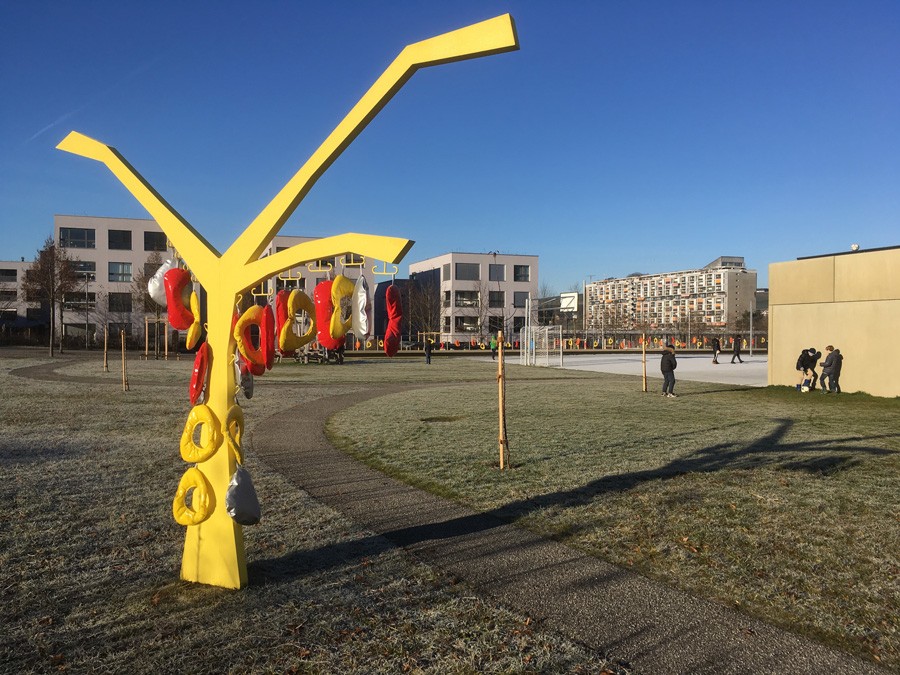 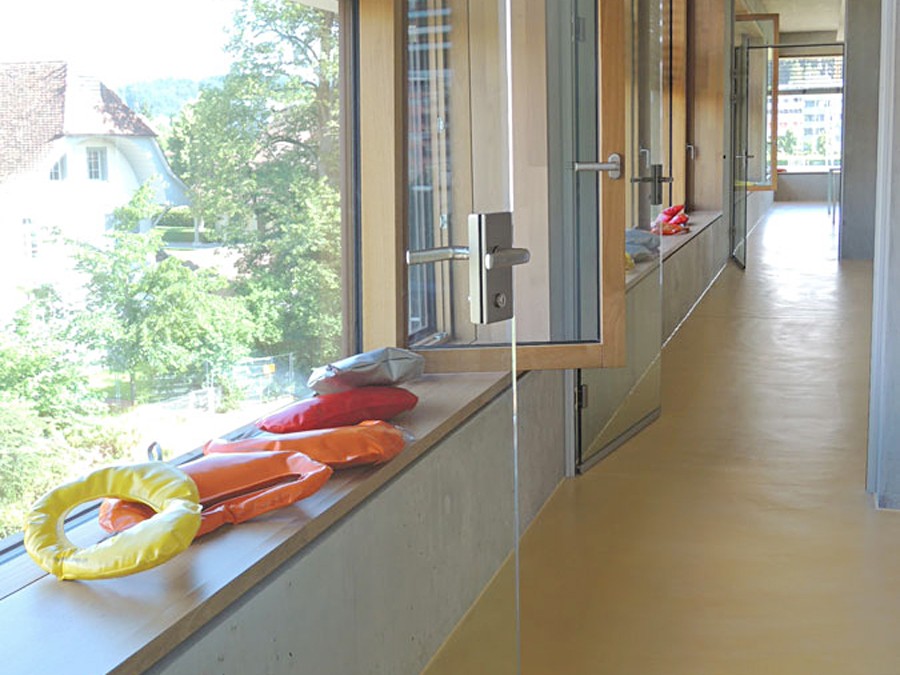 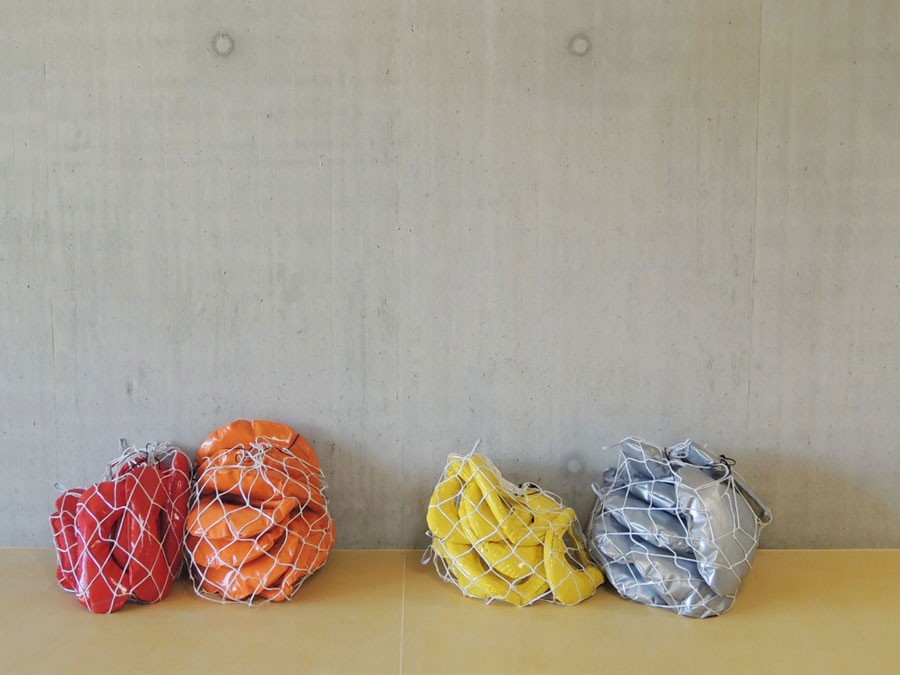 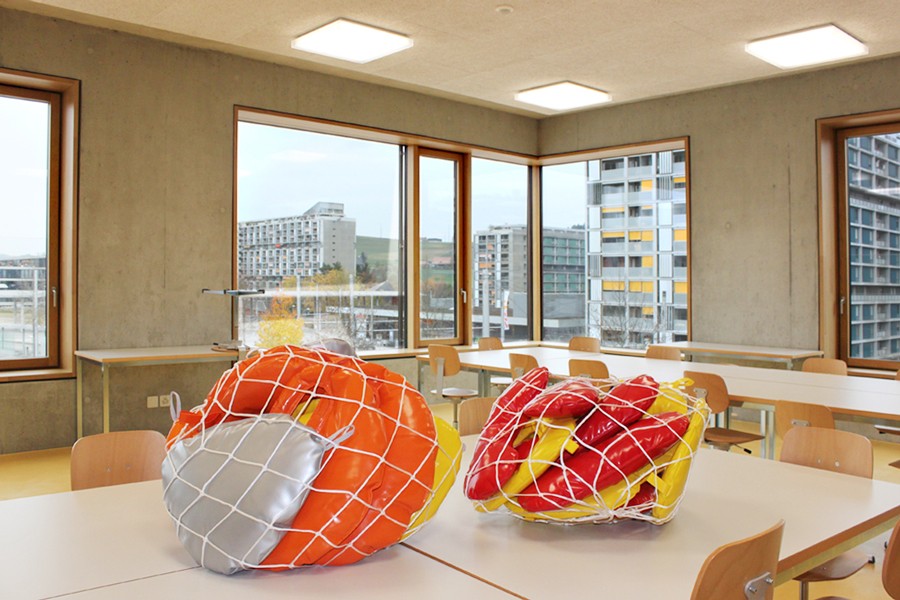 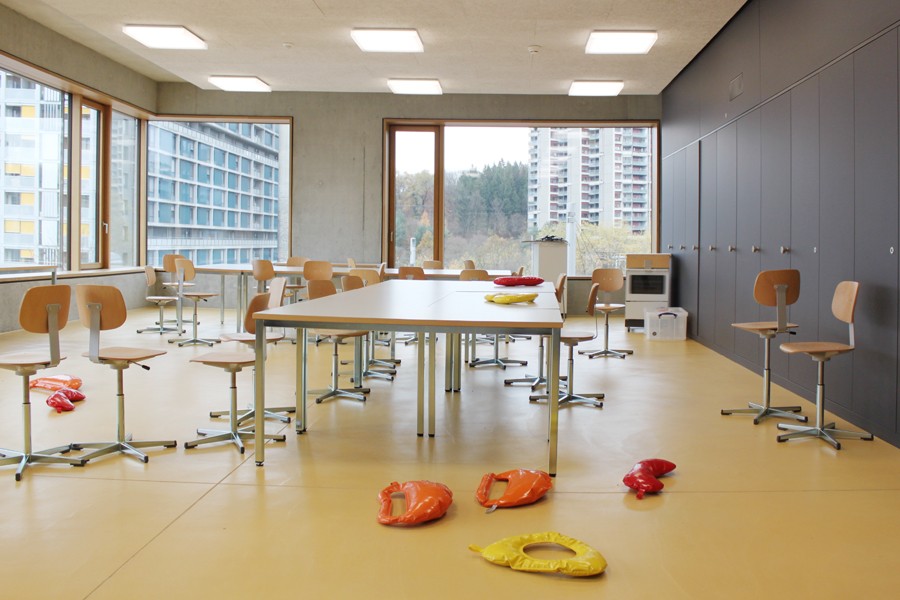 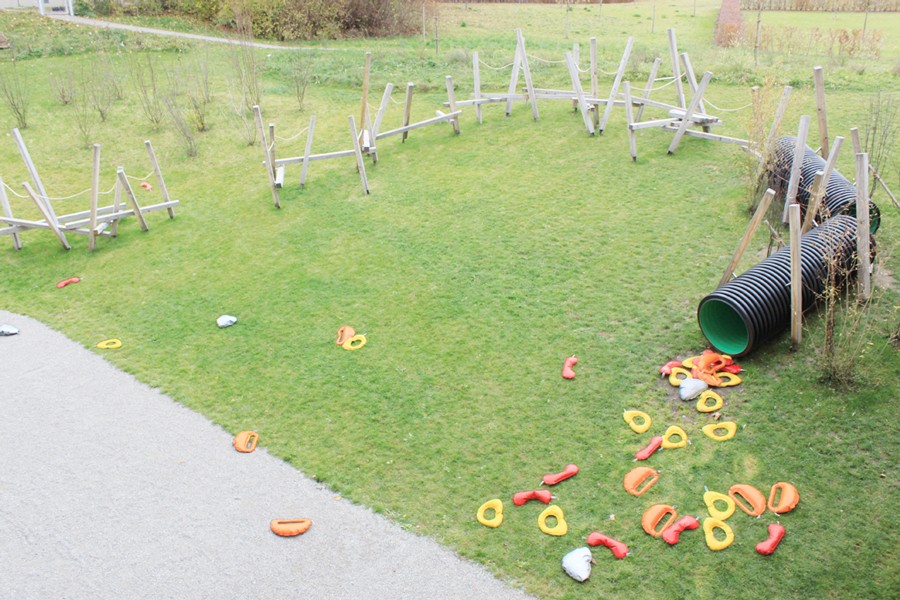 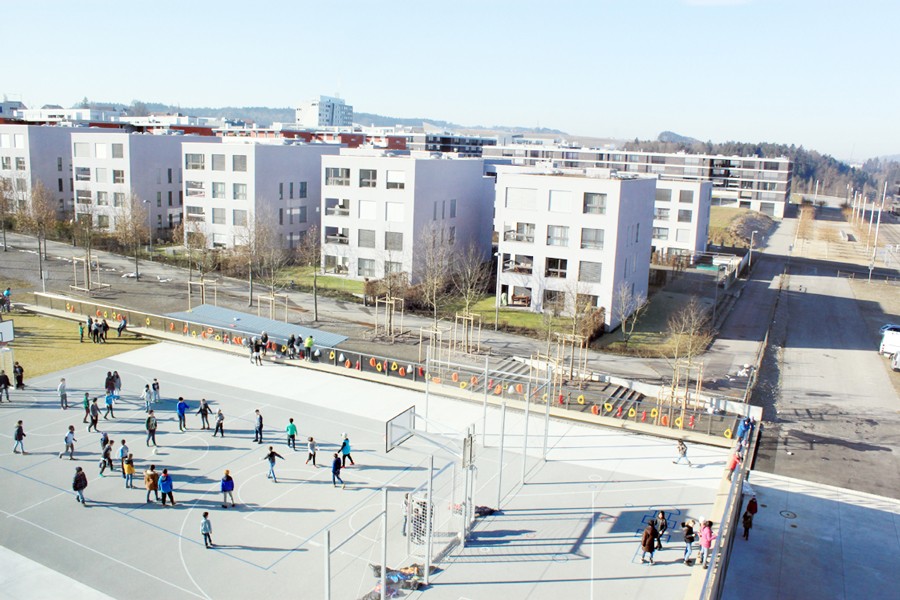 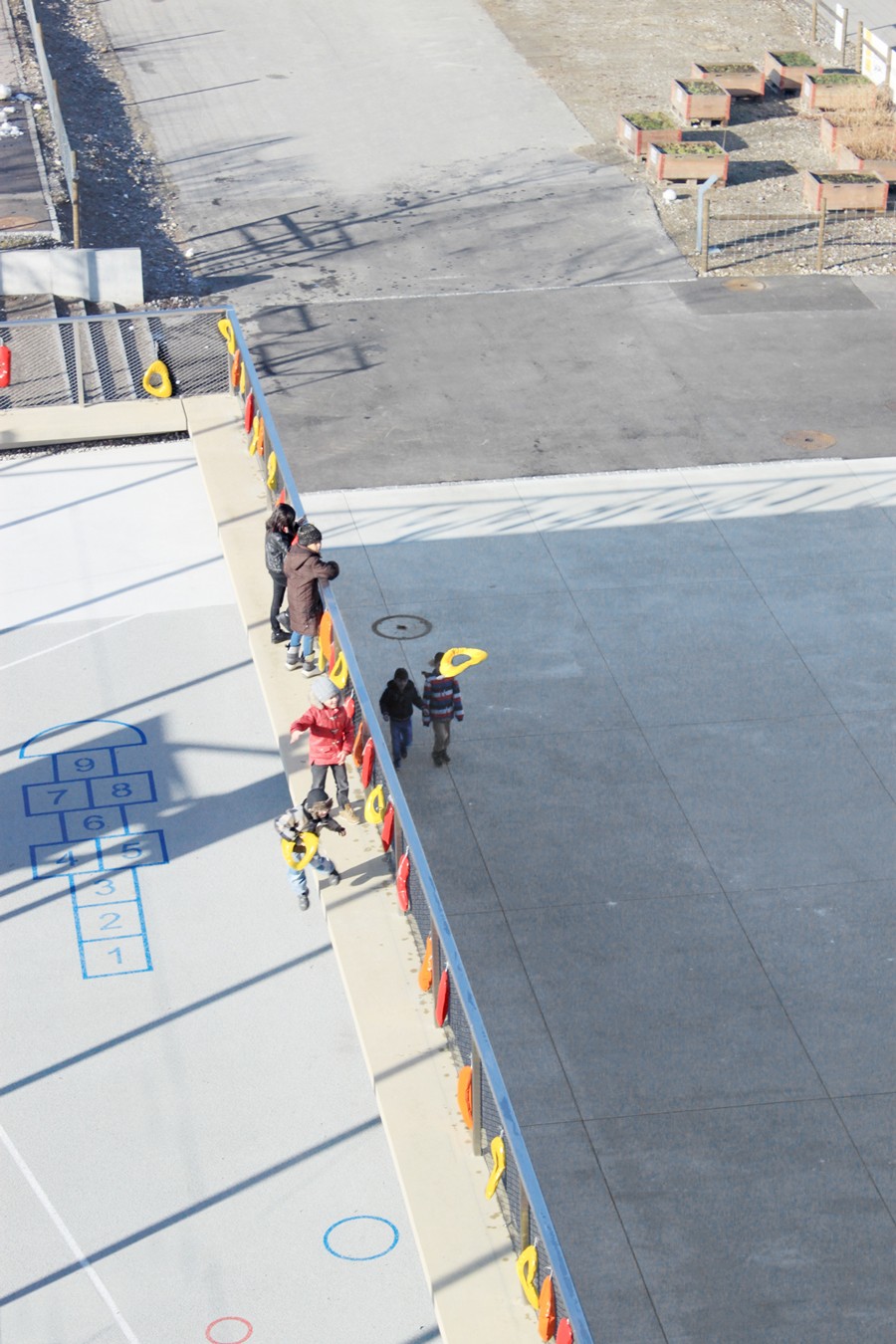