The retirement home center Trotte offers everything from housing services to care. Retirement home center here means also an imposing building on a steep slope. With access via the lobby on Nordstrasse, the cafeteria on Trottenstrasse and the public park, the dwelling is firmly embedded in its neighbourhood life. Who lives here? The center, completed in 2019, enriches the population of Wipkingen with people of the generations who have experienced the socially and politically intensive 1968s, such as the women's right to vote finally introduced in Switzerland in 1971. This also includes a generation of people who moved to Switzerland as a result of a high demand for labour, who contributed to the prosperity and fortunately remained in the country. It is not to be omitted that many residents have been through several stages of increasingly rapid technological change and already have experience in managing the interconnected digital world.

Art in everyday life
No retirement home center without a casino. But CASINO is different. It offers three permanently installed Wheels Of Fortune placed over three storeys of the building as well as twelve Petanque-ball sets to be played in the park.
The Wheels Of Fortune are both images and objects. They are functional, just one touch and they rotate; they refer to the inner life of the Retirement Home and, at the same time, to life of the neighbourhood and beyond. Turning a Wheel Of Fortune is, on one hand, a game that is actually quite individual and personal. On the other hand, the Petanque balls, are mobile and have no fixed place. The game of Petanque is played rather with several players, in the park of the center or elsewhere on a suitable site. Playing is spending time, alone or in a team. Getting involved in a game means changing roles, facing different situations. The wheels and balls are accessible to everyone, resident and staff of Trotte and all visitors.

The Wheels Of Fortune
16 words are silkscreened in a circle on each Wheel Of Fortune. Each person who spins a wheel has its own criteria in order to deal with the contents of the words and whether the person wins, wants to win or has won something. There are no rules. The wheels are mounted to the wall; they are easily set in motion by a slight movement of the hand. A rubber lamella touches the metal bolts of the spinning wheel, creating a pleasant noise more or less rhythmic. The lamella resists the rotation, which slows down the wheel and finally stops on a word.

Wheel Of Fortune – MUST & WANT
The wheel is located at the Nordstrasse entrance of the Home. The entrance hall is the threshold of the house, with reception, mailboxes, elevators and stairs. People meet here, they wait or they are just welcomed. The hairdresser is also located in this hall. There is a constant coming and going in the lobby. The words of the wheel are red, they are part of the vocabulary of possible walks inside the center, they can also recall future trips, actions planned or lived or invented all over the world.
do nothing • bricolage • pacific • coiffeur • silence • smoking • mediterranean sea • cafeteria • ocean • launderette • fitness • cinema • game • travel • sensing • garden

Wheel Of Fortune – NEED & DESIRE
The wheel is located in the staircase, not too far from the MUST & WANT wheel. It refers to the needs or desires or lusts or obstinacy and also to the appropriation of the outside, like parks in the city, elsewhere. The silkscreened words are blue. Even if they are coming from groups of various definitions, they are of equal importance here. Whether it is a small detour, a memory lapse, a village square, a zoo or sex, it is the person who turns the wheel who decides how to interpret the result.
small detour • sex • relax • patience • memory gap • anger • today for free • courage • castle in the air • flea market • zoo • village square • park • market hall • disco • on the trees

Wheel Of Fortune – TO HAVE & TO BE
The wheel is located in the cafeteria near the elevator. The words in red refer to possible values of the verb to have - I have – and the words in blue to the verb to be - I am. Although these two colours mirror words from each other, they are neither opposites nor complementary. This wheel allows to create a self-image, a kind of spontaneous and temporary self-portrait. Eventually the result may disappoint. In this case, it should not be forgotten that the result is always a subjective interpretation.
for abundance • naive • neutral • plaintive • militant • calculative • partial • generous • dreams • visions • intuitions • friends • time • money • lobby • enemies

Petanque Balls
The balls, on another hand, are mobile and have no fixed location. The game of Petanque is played by several people, either in the park of the retirement home center or elsewhere on an adapted site in the city. A total of twelve 3-Ball sets, in portable wooden boxes, are available. The balls are made of stainless steel, engraved with words chosen from those of the Wheels of Fortune and which designate places outside the center, with the exception of 2 words: laundry and hairdresser.
castle in the air • flea market • zoo • village square • market hall • disco • ocean • launderette • cinema • mediterranean sea • hairdresser • pacific
.
. 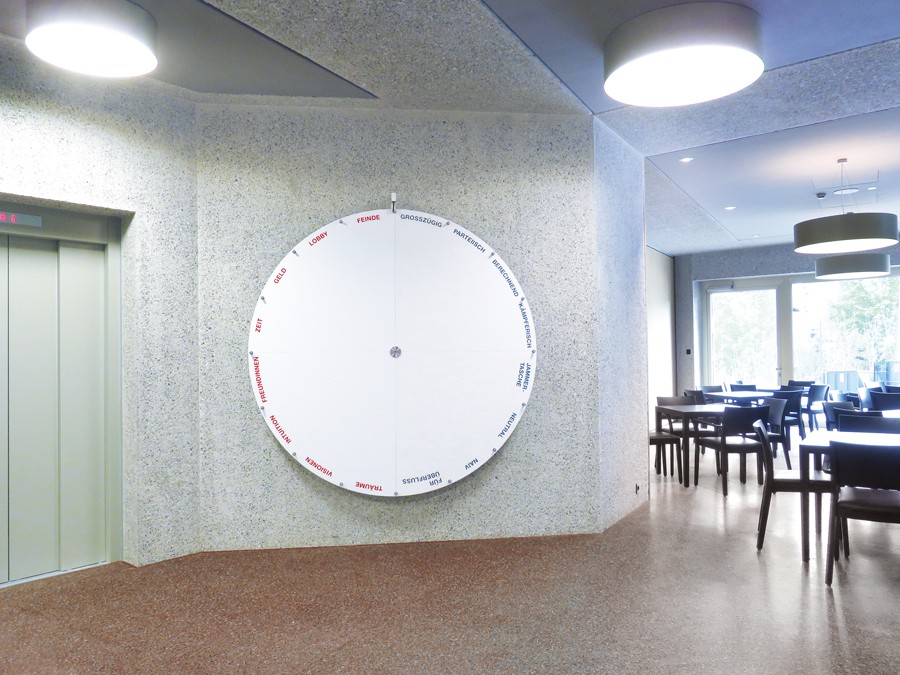 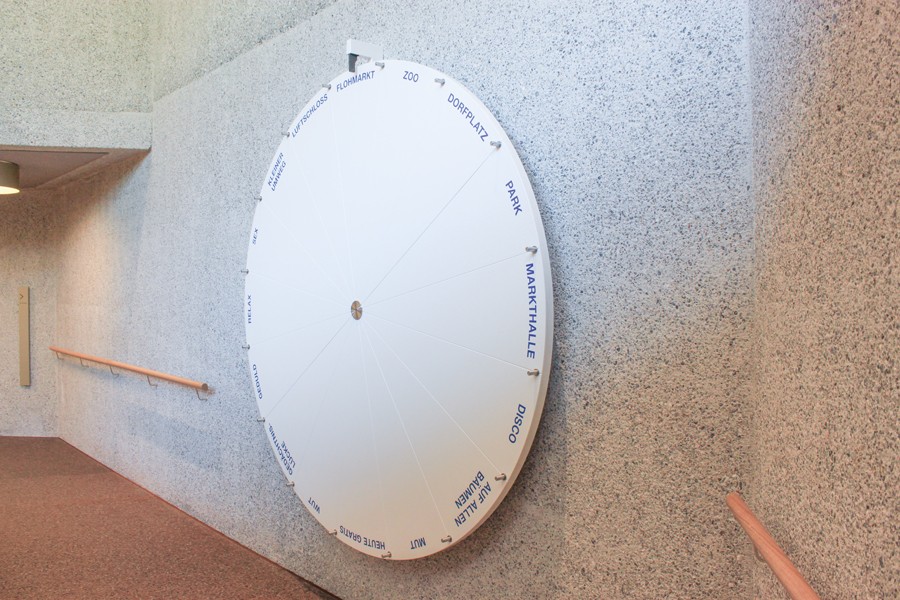 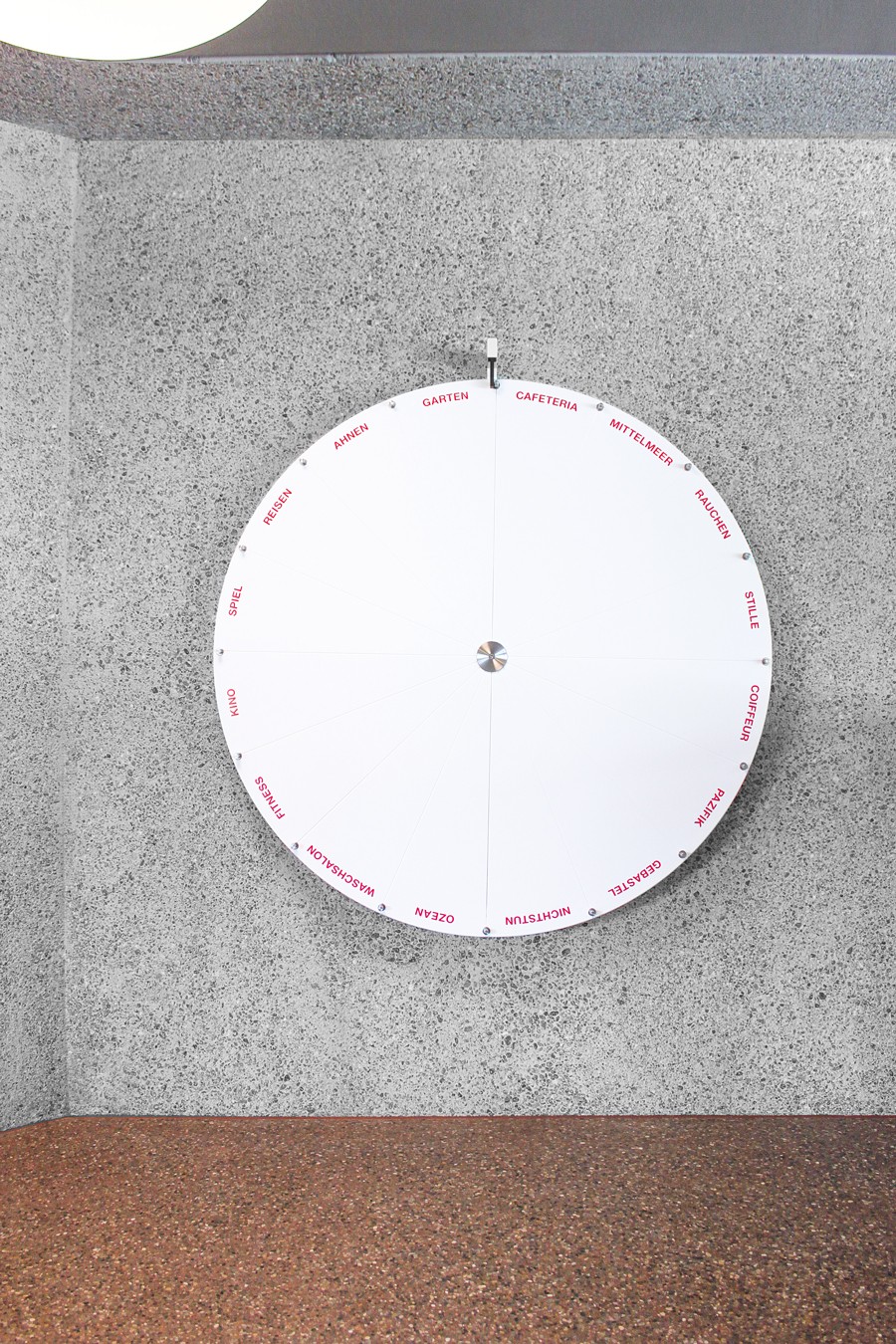